Not in my official capacity as the Executive Director of the Mid-America Bigfoot Research Center, but on my own accord, I decided to check further into the "famous" or "infamous" New York Baby "Bigfoot" footage that has been around since about 2004/2005.  In this footage, what appears to be something swinging in the background behind some festival goers has been repeatedly claimed to be a juvenile Bigfoot swinging in the trees.  What is it really?  We will never really know for sure, but with the advances of technology, we can delve into the footage and see more than was previously viewable in the past.

What made me decide to look into this was a post made on the Bigfoot Field Guide episode that showed the New York Baby "Bigfoot" footage.  Which can be viewed here:

There is a lot of debate about whether it's a small flag tied to the antenna, but I decided it was worth looking at the footage to see if there was any credibility to that statement.

Just some quick background information from Steve "Squatchdetective" Kulls website about the investigation he conducted into the footage.  I highly recommend checking out Steve's site for not only this footage, but a lot of other investigations he has conducted.  Squatchdetective Website

I will give just a quick rundown of the information here.

The EventOn May 23rd, 1997, Doug Pridgen and his wife were camping at Lembo Lake Campground, located in Modena, New York, in the heart of New York's apple country.

The InvestigationThe film was shot with an Video 8 Sony Handycam, model number TR64, shot in NTSC format, on May 23rd, 1997 at approximately 7:30 - 7:45 PM EST, in Modena, NY, specifically at the Lembo Lake Campground.

Weather information was compared to both the videographer's account and as indicated on the video and was accurate. The property owner Mike Lembo was contacted and confirmed the information per not allowing pets was accurate, and it was. Nearest game farms and zoo's were contacted and none reported loosing any primates in that time period, and newspaper articles were searched for any plausible explanations and none were found.The campground, unfortunately had since been turned into an ATV park, now called "ATV Park New York," and the original campground terrain is nothing as it had been in 1997, many trees being removed and original trails bulldozed.

Immediately behind the area is a large apple orchard and the area is ripe with farms and orchards, and is immediately adjacent Plattekill, NY, an extremely rural community.

Upon initial examination of the VHS tape, videographer had supplied me with, which was eventually sent off to the parent organization I belonged to at the time,  it was discovered that there were actually two unsubs in the film. One larger and on the ground, and one which appeared to start, either being carried by the larger one, or on its back.

The larger unsub walks from right to left in the video, and appears to stop and move back to right to the point of where the small unsub had begun to climb the tree. The larger unsub then walks away from the focal point of the camera and out of sight. The smaller unsub, climbs the tree in under ten seconds, appears to swing twice between the two trees and the begins to hang off a tree. The height estimate from the ground, of the creature in the tree ranges from about 25 feet to about 20 feet depending on which part of the film is being explored.

I had the VHS tape converted to a DVD and the VHS was sent off to my parent organization at that time. (BFRO), but retained the DVD, which made video capture and analysis easier.

Throughout the years the videographer's story has remained consistent and concise and no deception has been indicated.

The videographer even sent Steve a drawn out layout of how the camp and trees were situated. 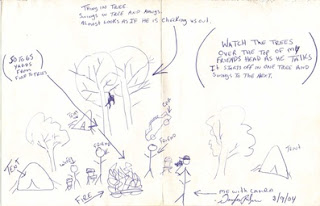 So what did I do to analyze the footage?
First I obtained a 1st Generation copy of the footage from it's conversion from videotape to DVD from Steve Kulls.  I converted this into HD avi format and ran a deshaking program on it, as shown below:

I then used software that is used by world class athletes to examine their motions by being able to slow down the video and by magnifying certain parts of the video so that a trainer is able to view anything that may be unhealthy or that needs to be worked on.

Doing this, we discovered that out of the entire 2 minute and 12 second video, that there were only three short periods of time that the tree and figure were viewable, so we selected only those time frames for the analysis.


So what did the analysis reveal to me?  I will reveal that in the next post here on the Bigfoot Field Guide Blog, so stay tuned.   (Also because it's 2 a.m. in the morning and I'm exhausted, so another blog post will be made.)

Posted by Darkwinglh at 1:57 AM